In recent years, many literature has identified several non-cognitive skills that predict success in various domains of life, over and above IQ. Non-cognitive skill grit is perseverance to accomplish long-term goals in the face of challenges and setbacks. Studies have shown that grit is a reliable predictor for educational attainment, job stability, entrepreneurial success, and performance. Meanwhile, perseverance can be fostered through educational interventions. From the vast literature on peer effects, we know that individuals are influenced by others working with them.

The aim of the present experiment is to study peer effects in perseverance in a controlled setting where participants will be observed while working on a real-effort task. For the first part of experiments, Gerhards and Gravert (2020) develop a behavioral measure of perseverance that is obtained in a short run, incentivized laboratory experiment. In the second part, participants’ skipping behaviour will be compared, when they are working by themselves (Baseline Treatment) to a peer situation (Peer Treatment) where half of the participants are informed about their peer’s skipping behaviour.

Participants will work on an anagram word-play task. The participants’ main task is to solve hard anagrams that consist of 5 to 7 letters with an option to work on easy anagrams that consist of 3 to 4 letters, but the latter is monetarily unattractive because by solving the easy anagrams, participants will only earn a tenth of the amount of money from solving the hard anagrams and they will lose out on potential profits if they switched to easy anagrams. In the main stage (Part 1 and Part 2) of the experiment, participants are paid based on their performance. The experiment is conducted with this timeline:

Observers are constantly informed about their Peers’ skipping behaviour, the total number of hard anagrams their Peers’ has skipped and whether they are working on easy or hard anagrams. Peers receive no information about their Observer’s perseverance or relative task ability but are informed about the type of information that the Observer receives about them. In the last stage, Gerhards and Gravert (2020) administer a short questionnaire. In the task-related part of the questionnaire, participants will be asked about their perception of the task. In the survey part of the questionnaire, participants will be asked about their personal and socio-demographic information and administer the Grit-S Scale, which comprises eight items. Four of these items measure respondents’ consistency of interest over a long period of time, the remaining four capture their perseverance of effort on (work) tasks. Part 2 aims to test whether observing a peer working on the same task affects the observers’ propensity to skip. 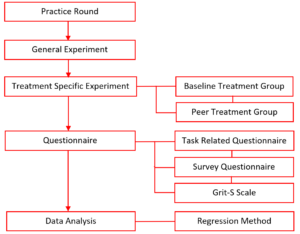 Table 1 shows that distribution of correctly solved easy anagrams, propensity to switch to easy anagrams, and number of solved hard anagrams do not differ significantly across treatments. Participants’ perseverance is also found to be negatively correlated with number of skipped anagrams. In table 2, it is found that this negative correlation is significant. The regressions shown in table 3 show that observers skip significantly fewer anagrams than participants in baseline treatment. Perseverant participants are less affected by the peer effect. Regressions in table 4 show that participants’ perseverance increases as they observe a peer avoiding the main task.

Summary of the findings of the experiment: 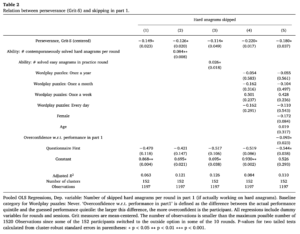 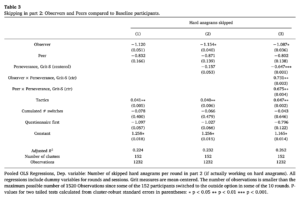 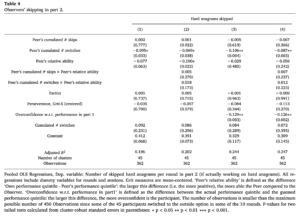 The experiment results confirm that perseverance is affected by peers. Observants’ level of non-perseverance decreases significantly as they observe behavior of their peers. Perseverance does not only depend on individual’s inherent traits, but can also be increased by peers.

The research findings suggest that students could benefit from studying in a library or study rooms instead of studying alone at home, workers from working in an open-plan offices, and athletes from training with other athletes in order to reap motivational effects by observing peers staying persistent in what they are doing.