The Intersectional Nature of Environmentalism and Queer Identities

Injustice is apparent in situations where resources are limited, and acts of alienation are systematic acts of raising artificial barriers to divert resources away from particular groups of people. It obstructs them from accessing certain measures crucial to sustaining life, which include the right to exist and coexist. But how are the two situations relevant in the discussion for both environmentalism and the LGBTQ (lesbian, gay, bisexual, trans, and queer) rights movement?

Both movements has endured its fair share of marginalisation and discrimination from its surroundings, be it in a passive or aggressive manner. The two movements are not comparable in nature and doing so is downright minimising the complexity of those movements. However, intersectionality, defined as the interconnected nature of social categorisations as they apply to a given individual or group (Oxford, 2020), allow us to widen our horizon and reach more people than ever through the act of empathy.

By understanding where both the LGBTQ rights movement and environmentalism came from, we are able to understand the prolonged hurt enforced on them through injustice and how our complicity lies in our perpetuation of flawed systems.

The rejection of environmentalist movements tends to be based on the notion that certain acts exist on a dualistic notion, where things are defined “correct or incorrect”. This issue extends further when the different philosophies of cultures counteract one another. The binary nature of western scientific philosophies actively disenfranchises any tropes that can be classified as “others.” To recognise that the idea of “natural” arises from human perspectives on nature and “not nature” itself (Schnabel, 2014) is to rid of our preconceived generalisation of how we see the world through the act of recognition and inclusion.

This issue is especially felt by the Aboriginal people of Australia, where their definition of ecological conservation greatly opposes that of the western settlers’ philosophy (Dwyer, 1993). This caused problems to the nation’s ecological health caused by changes to fire regimes and the devastation caused by introduced species like cats, foxes, and camels —a phenomena visibly portrayed by recent news of bushfires in the country and historical events, such as the infamous construction of the Rabbit Proof Fence of Western Australia in the 1900s. The removal and systematic alienation of Aboriginal Australians from their land has caused not only huge cultural, social dislocation, and difficulty for them, but also proved disastrous for the ecological conservation of the land (The Nature Conservancy Australia, n.d.). 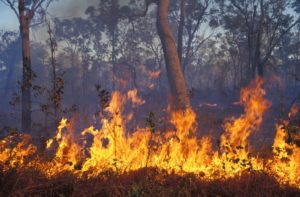 A fire set by Aboriginal Australians in the Arnhem Land region of northeastern Australia to burn off dry undergrowth. (Source: Penny Tweedie/Alamy)

One of the sprouting campaigns for the empowerment of the Aboriginal people is through the recognition of the role of ecological stewardship on their land, which ensures the upkeep of traditional knowledge, indigenous culture, and the ecological health of the land itself. This has direct implications on the successes of conservation work in the region whilst supporting the transfer of knowledge from elders to young people.

As Australia moves away from the extractive institutional power of their colonial days and towards an inclusive, multicultural society of the 21st century, the recognition and act of openness to various schools of thought plays a crucial role in ensuring that no one gets left behind in the pursuit of prosperity and the progress of time.

Friction between different philosophies doesn’t just happen between external powers, such as the issue brought up earlier, but it also occurs internally. Homophobia and heterosexism —the discrimination or prejudice against homosexuals on the assumption that heterosexuality is the “normal” sexual orientation (Oxford, 2020), are still very much prevalent in contemporary Australian society.

Irwin (2007) iterated how homophobia and heterosexism affect policies and attitudes indirectly and unintentionally. For example, the case for Australia’s nursing practices, where LGBTQ patients doesn’t receive the same level of courtesy and attention as well as heterosexual patients. Minority stress theory asserts that the stressors of being a minority group create or contribute to poor state of mental health (DiPlacido, 1999). Discrimination in the form of heterosexism continues to be a problem in various institutions (Smith & McCarthy, 2017); homophobia and heterosexism need not be conscious or intentional for it to wreak havoc on our society. Injustice isn’t always legislated, but it does have roots in alienation.

Queer ecology rids the binary notion of “normal” and “not normal” and boost visibility of folks whom the system have failed to recognise it and let it fall into the cracks. An inclusive institution, defined by Acemoglu & Robinson (2012), as the allowing of broad participation and placing constraints & checks on actors of the rule of law. Placing LGBTQ folks on the same pedestal as its non-LGBTQ counterparts ensures the broad participation of all members of society, and the recognition and acceptance of the various forms of identities and expressions is one of the easiest steps to make in promoting inclusivity.

“But Indonesia is different!”

Pratono Iskadar (2016) highlighted the role of Indonesia’s exceptionalist attitudes in the legitimation of their deviation from global phenomena —and in the case of this article, it’s from the systematic marginalisation of minorities. Pancasila, as an ideology itself, has been reused and recycled for so many times to the point that he coined the term The Pancasila Delusion.

His findings elaborated further on how the ideological model has ceased to act as a “middle ground” for the diverse nature of Indonesian communities and its politics, and served more as a case of arbitrary application for publicity. Regardless, there are no signs that Pancasila as a national ideology is disappearing from the livelihood of Indonesians at any time in the near future, but what we can do right now is to stop exploiting Pancasila as a justifying tool to criminalise and further marginalise the disenfranchised.

On 26 January 2018, a member of the country’s representative council, published an article that casually links the support for the LGBTQ communities as an act of aggression to Pancasila, and calls the “immorals” as a threat to Indonesian society (Parewangi, 2018). This calls for exclusion risks plunging the country into a state of political regression, and trends indicate that Indonesia is well under way (Warburton & Power, 2019).

The use of Pancasila has united Indonesians through its versatile applications, yet activist movements in Indonesia reflect the reality that they are more fragmented than ever. The September 2019 movement in protest of the draft criminal code bill, Rancangan Kitab Undang-Undang Hukum Pidana (RKUHP) indicates the solidarity between different facets of Indonesian communities. This only highlights the few occasions where enough people are on the right page at the right time, and it does show that Indonesians are capable of uniting under the same goal.

However, on 23 October 2019, a number of activists climbed national monuments, Monas in Jakarta, to attract attention to the rapidly growing environmental destruction of the country. Despite being under the same umbrella movement to that of the RKUHP protest, under the name #ReformasiDikorupsi, their movement only gained a slight traction with some news agencies and an even fewer number of politicians (Patnistik, 2019). “They’re fighting for the greater good,” said Ryan Nasution (2020) of the University of Melbourne’s Master of Environment candidate in an interview, “but they’re fighting alone because there’s no sense of solidarity in (Indonesia),” he said.

There’s an urgent need for Indonesians to think and reinvent ways to consolidate the power back to the people. Unity in diversity should serve a greater purpose other than being a political buzzword. “Indonesia’s draft criminal code (RKUHP) is disastrous not only for women and religious and gender minorities,” said Adreas Harsono (2019) of the Human Rights Watch stated, “but for all Indonesians,” he added. When we realise the demise of others will eventually be the cause of our own, the more proactive we will be in our proactivity in uplifting others.

More recently, a prankster has come under fire for his attempt in pranking trans folks on the streets by giving them a concealed care package filled with rubbish (Bebey, 2020). The Internet mob came for him as his sort of exploitation for the sake of “views” on the internet is insensitive, especially since he targeted people from an already-marginalised community. The fact that they’re still on the street in the middle of a pandemic highlights their state of impoverishment. This got to the point where the police got involved —an unlikely partner during a time like this. It’s unclear whether the police will get involved with this case if the Internet mob hadn’t been involved, but it’s a sigh of relief because we don’t need to imagine it for the time being.

Similar act of solidarity was also felt by the fisherman of Jakarta Bay as a number of support flooded their movement in protecting the bay’s ecosystem threatened by the reclamation project (Lembaga Bantuan Hukum Jakarta, 2016). By listening to the people who have lived with the sea, the people now have the insight that goes further than the speculated economic prospects of a new island on their sea. Such movement would not have been successful if inclusive measure by the different movement groups had not been considered and exercised.

The disenfranchisement and suppression of communities have wreaked havoc within and without the institutional system. Environmentalism and LGBTQ rights movement have a long history of being systematically, actively quashed by institutions they have little say in. Yet, the busy sun and rain brought them back with more strength and resilience than before.

The unsustainable nature of extractive institutions upholded by acts of alienation and injustice will not stay long, just as the Australian outback will not stay long without the mutual stewardship from the people of the land and the high rate of “missing numbers” from the system as a result of unaccounted heterosexism. The road to inclusion is far more winded than a simple switch of a button. Also, the embracing of new and different schools of thought is not a comfortable journey for many.

Confrontation and exposure to different cultural philosophies tends to lead towards a frictional transition period, but the former showed us that the upkeep of extractive institutions are a costly and ineffective fight. To embrace change is to be open to future opportunities, so let’s start by including LGBTQ folks and environmentalists in the discussion that determine our future as much as it’ll determine theirs.

Thank you to both my anonymous source and Ryan Nasution for their amazing insight on the subject matter. The world needs more people like you!

Any cookies that may not be particularly necessary for the website to function and is used specifically to collect user personal data via analytics, ads, other embedded contents are termed as non-necessary cookies. It is mandatory to procure user consent prior to running these cookies on your website.